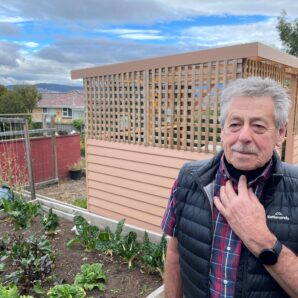 Quit smoking as it will affect your future.

Wayne smoked for 25 years before cancer was found in his throat. His voice box had to be removed in order to save his life.

Wayne was introduced to smoking at the age of 20 when he joined the Army in Victoria. The barracks canteen had a lot of cigarette advertising, promoting the glamour and benefits of various cigarette brands. He remembers there even being some brands promoted as “doctor preferred”. Regardless of whether they smoked before joining or not, everyone ended up smoking in the Army.
Wayne’s habit soon hit 20 smokes a day and he smoked at that rate for the next 25 years.
For the whole 25 years Wayne admits he never liked himself smoking. Once he had kids he knew he really didn’t’ want to smoke anymore. He knew it wasn’t good. He was sick of it – the smell on his fingers, clothes and panic stations when he ran out of cigarettes. He was also spending around $80 dollars on smoking each week (around $135 today). He had also developed a cough.
So he set him a date to quit – his birthday – which was around three months away. Every night going towards that date he would remind himself of all the bad things about smoking. Things like the cost, smell, ash getting everywhere and burnt clothes. He would then think about all the good things that come about from not smoking like clean fresh breath and not being controlled by it.
When it came to quitting he tried nicotine patches. He also made himself get used to not having a smoke with a beer. He did go it alone as he was brought up not to talk about his problems when you were having trouble. One tip he shares to help you quit is to cut up a carrot into cigarette sized sticks and eat one whenever you feel like a cigarette.
Unfortunately, 15 years after quitting, Wayne developed a sore throat. He had his suspicions that it might be cancer, especially as the pain was on one side. For 3 years it wasn’t checked out further by his local doctor so he felt it had gone on too long and demanded to see a specialist. Sure enough, he had a cancer on his adam’s apple. He underwent three months (36 sessions) of radiation treatment. The treatment made his throat burn badly as well as affecting his ear which had been injured in a grenade incident while in the army. Unfortunately the radiation didn’t work. He was then told if he didn’t have the cancer removed he would be dead in 6 weeks. The cancer was removed by surgery called a laryngectomy which involves removing the voice box. While it saved his life, the surgery and recovery was horrific. This was 13 years ago.
The effects of the surgery were life-changing. Wayne had to learn how to swallow and talk again. To talk he has to insert a tube to a hole in his throat and press the hole to make speech. He can’t talk loud so has to avoid noisy situations and feels he can’t ever get enough breath. He has also lost his sense of smell and taste as well as suffers from painful skin irritations around the tube. The worst thing is he can no longer swim or go near water. His love of sailing making this particularly hard. If Wayne fell in water he would drown immediately. When watching the footy he can’t watch high up in a stadium as he needs to be close to a sink should he get fluids down his windpipe and needs to flush it out with a cleaning kit.
Wayne has watched the Quit Tasmania “Voice Box” television commercial showing the real removal of a voice box in surgery. It shocked him and reckons it is very effective.

What are Wayne’s words of advice to smokers?
Give up now. If you notice anything get it seen to as it will get you. You should know your own body, you wouldn’t forgive yourself – it if feels wrong it could be.
Quit smoking as it will affect your future.