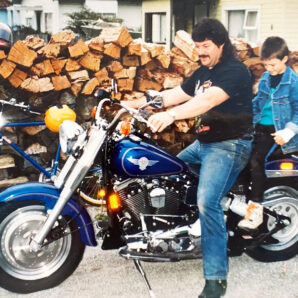 If I can do it, anybody can.

Mad Dog had been a heavy smoker all his life but decided to chuck the cigarettes around 15 years ago and go and get himself the bike he’d always wanted – a Fat Boy Harley Davidson. All the money he would have spent on smoking went into a bank account, around $10,000, and 18 months later he got himself the brand-new bike.

But he took it up again – made the mistake of just having one. Then one day lit up a cigarette and had a massive coughing fit. His wife called out “One more coughing fit like that and you’ve won yourself a pine box”. She was 100% right. To quit he put his smokes in the cigarette stand near the door and each day he left the house, would swear at them telling them to ‘f*** off’ telling himself he doesn’t want or need them, and did the same thing when he came back into the house. This happened for 4 months. By swearing at them and not taking them with him he felt empowered that they didn’t get to him.

He felt so much better without them. Being a commercial diver Mad Dog had to have regular lung function tests. Within 3 years his doctor told him his lungs were almost back to that of a non-smoker.

To stay quit he said you need emotional support to get over the hump – the first week if the worst. If you fail, you don’t want criticism from anyone. His second attempt was much easier as he knew what to do and one thing was not to hang around the smokers. You get better each time. His advice is once you’ve quit is don’t be tempted to have one as you’ll have to turn around and do it all again.