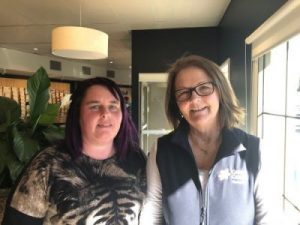 Christine is 33, married with kids and a proud successful quitter.

Seeing her mum struggle with emphysema was Christine’s motivation to quit. She was scared for her mum and what her own life would be like if she kept smoking. Her mum had a health scare and ‘seeing her more or less lifeless, no energy scared the crap out of me’

According to the My QuitBuddy app, which Christine is using to follow her quit progress, she had been smoke-free for 130 days, 2 hours and 58 minutes when we had a chat with her. She had saved thousands of dollars, avoided a lot of tar in her lungs and has a lapse free status . She looks at the app all the time on her phone to remind herself of why she no longer smokes. She also used the games on it to distract herself from cravings. Checking her status and doing the games became her new habit. It convinced her what she was doing was working. In one of their conversations, Wendy, a Quitline counsellor, had told her how to use the app and all the things she could do on it to help with her quitting.

Here are some other things Christine wanted to share: